RSS
← A wretched man saved by Grace
The KNOCKOUT Punch →

The effect of Pride (Learnings from UFC 162: Silva vs. Weidman) 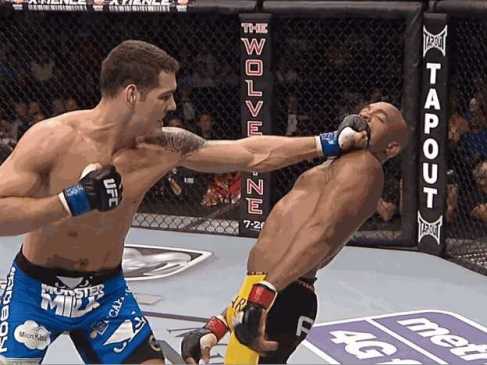 For those of you who don’t watch MMA (Mixed Martial Arts), one of the greatest athletes to ever play this sport is: Anderson “the Spider” Silva. This guy is the human highlight reel. Owner Dana White said that he does things in the Octagon which you can only see in the movies. This guy is surreal. If you want to know and experience what I’m talking about, go to YouTube or google his fights. He was riding on a 16 fight win streak! Next to him is George “Rush” St. Pierre with 11 wins he won in a row. At one point, everyone thought that no one was going to be able to beat this guy because this is how good he had become.

All that changed yesterday when Anderson Silva lost due to a knock-out. As the fight began, it was the typical challenger meets champion. The challenger isn’t really that popular so everyone thought that this would just be another walk in the park for the Spider. So much so that Anderson Silva taunted and showboated. He was doing some moves wherein he appears to be mocking his opponent. At one point in the match, because of Silva’s showboating and taunting, his opponent was able to punch him with his left hand. Silva acted to be shaken by that punch, he wobbled his legs pretending to be hurt. This led to the beginning of Silva’s downfall. Because of what he did he had put himself in a bad position, thus his opponent began attacking him with a flurry of punches. Anderson Silva, because he was out of balance, got caught with a left hook again that knocked him out for good.

This is a good reminder for all of us about the effects of pride. Proverbs 16:18 clearly says:

“Pride goes before destruction, a haughty spirit before a fall.”

What happened to Anderson Silva is a clear illustration of this truth. Had Silva not showboated and focused on his opponent I believe that he still would have won that fight. He is after all the greatest UFC fighter in history in my opinion. Some may argue that he was already doing that in most of his fights, but nonetheless the error he committed was one of basics in boxing not to put your feet in a parallel position. Joe Rogan, the commentator, said he committed a textbook error.

This is a good reminder for me, that no matter what I’ve accomplished, where I’ve been through. If I let pride slip into my heart, then that would be the beginning of my downfall.

Let’s learn to always keep that heart of humility, after all humility can be learned (without showing off that you are humble) lest we let pride creep in our hearts then we know that the effect of that would be our downfall. 🙂

Posted by andrewwee05 on July 8, 2013 in Life Lessons, Uncategorized

← A wretched man saved by Grace
The KNOCKOUT Punch →

One response to “The effect of Pride (Learnings from UFC 162: Silva vs. Weidman)”